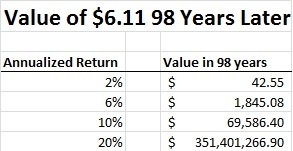 THE MIRACLE OF COMPOUND INTEREST

Compound Interest - The Most Powerful Force in the Universe?

Albert Einstein is said to have called "the power of compound interest the most powerful force in the universe." The story in this posting will illustrate the power far better than I ever could in theory. It will also allow me an opportunity to come clean on my use of this quote.

A recent Huffington Post story ran about a woman celebrating her 98th year as a customer of a local bank. June Greg's father deposited $6.11 into her account 98 years ago, when she was only two years old. My colleague Conrad deAenlle also wrote about this money in the bank.

Neither the article or the bank said how much the $6.11 would have grown to today. But if the account paid a 2 percent interest rate, June would now have $42.55 and could buy a moderately priced dinner to celebrate her 100th birthday.

On the high side, if she averaged 6 percent, June would now have $1,845 and could take herself and her extended family members out for a celebration. Pretty underwhelming though, wouldn't you say?

Now if Dad had invested it in the stock market and averaged 10 percent annually, June would be pocketing some real money - $69,586 - and could do a whole lot better than a dinner. Maybe take the family on a nice first class vacation, for example.

But what if Dad were nearly as good an investor as Warren Buffet who averaged a 21.5 percent annualized return? Hold onto your hat, June, because a 20 percent annualized return would have turned the $6.11 into $351.4 million. That's enough to buy a small island for the birthday celebration, or just about anything else she or her family could want.

Back to Albert Einstein
With such potential for astronomical growth, it's no wonder Albert Einstein called the power of compound interest the most powerful force in the universe. The problem though, is that there is substantial doubt he actually said that.

Jason Zweig, author of The Wall Street Journal's Intelligent Investor informs me that:
I once met Roy Glauber, the Harvard physicist who studied for a time under Einstein, and naturally asked him about it. He said, "But why would Einstein think compound interest is noteworthy, let alone powerful or wonderful?" To a theoretical physicist, I think an exponential function must be nothing special at all. Hard to argue with that logic. Looks like Dr. Glauber took the wind out of the sails of one of my favorite quotes. So to all those I've mentioned this quote to before, please accept a big, fat "never mind." Maybe the internet is the most powerful force in the universe since anyone can say anything and that's where I picked up this quote.